Could NYC’s Statue of Liberty have been one of the first crowdfunding campaigns? 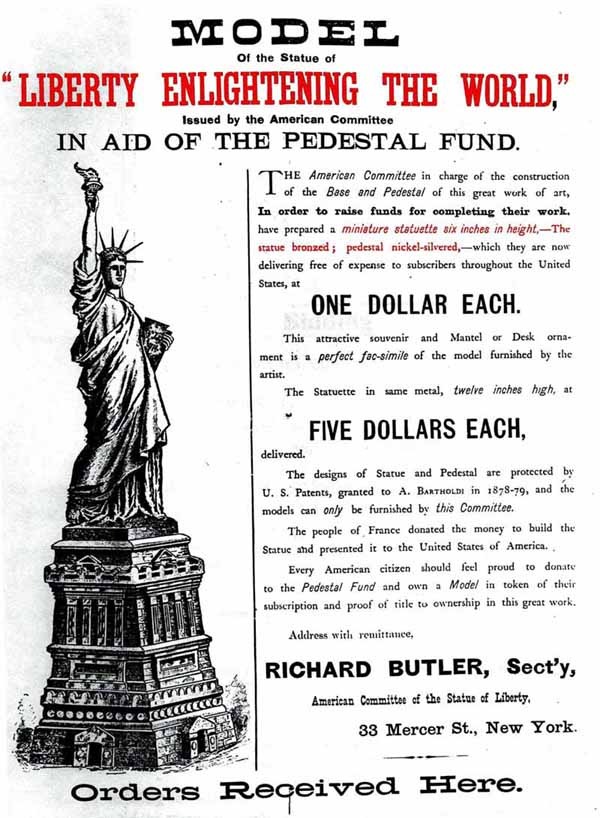 Crowdfunding has increased in popularity over the past few years and now it’s a very common way for entrepreneurs to gain both monetary support as well as feedback from their potential customers.  I had always thought of crowdfunding as a contemporary phenomenon that went hand in hand with disrupting the way entrepreneurial spirits seek funding.

When I was in New York earlier this year, I was amazed to learn that in fact the Statue of Liberty was only able to be built because of  what can only be called a ‘crowdfunding’ campaign.  The Statue of Liberty is a gift from France to the United States. It  was designed and promoted by Frederic-Auguste Bartholdi but the problem remained of how to pay for it. It was agreed that the statue would be paid by France and the pedestal would be paid by the USA.  The promoters of the statue in France formed the French-American Union, in 1875.  Donations of French citizens contributed to the fund, alongside that of the National and City Governments.

Eventually the Statue was built and shipped to New York, however the Americans had run out of money to finish off the pedestal. There was shortfall of about $100,000. Newspaper publisher Joseph Pulitzer took control of the situation.  He commenced a campaign promising to print the name of everyone who donated to the pedestal fund, no matter the size of the donation.  Millions of people from all over the USA started donating whatever they could.  True to his promise,the name of  each person who donated was  printed in the newspaper, The New York City Daily.  Even kindergarten groups got together to raise money.  One class in Iowa sent $1.35 to the fund.

This is a crowdfunding campaign in the true sense of the word – publicising an idea, uniting communities and giving acknowledgment to everyone’s contribution.